“Power concedes nothing without demand”

– Fredrick Douglass, quoted at the Whose Diversity? rally on the steps of Morrill Hall, Thursday, May 15.

This week, we’re highlighting the recent and exciting organizing work of Whose Diversity?, a collective of undergraduate and graduate students at the University of Minnesota. The group sees itself extending the struggles to challenge and transform the culture of exclusion and enclosure of Black, queer, Chicano, Indigenous, working class, and other minoritized spaces, knowledges, and people at the historically white institution. Even after threats by the University administration to sanction and even expel some of the organizers, the campaign continues to gain momentum.

Whose Diversity? say they’re taking their cues from such critical movements as the 1969 Morrill Hall takeover that led to the creation of African American and Chicano Studies and the 2005 General College Truth Movement, which sought to save the singular space that provided support for working class folks, older people, single mothers, and people of color to learn and get degrees at the U of M. More recently, Whose Diversity? has been influenced and continues the work of Whose University? during the 2010/2011 school year, which occupied Coffman Memorial Union with more than 700 college and high school students to  engage in critical dialogue around issues of access and representation at the institution.

At Classroom Struggle, we think it’s important to highlight this work, and situate it within a broader landscape of student organizing for substantive diversity in Twin Cities schools and universities. Struggles like the 2013 South High School walkout protesting attacks on the All Nations program and the more recent student organizing at Central High School in St. Paul protesting the criminalization of Black and Brown youth in schools, among others, illustrate how critical and necessary this work and the leadership of students is, at all levels of education.

Read below to find out more about the Whose Diversity? campaign.  Like their Facebook page to receive regular updates about their work and list of demands.

On May 8, 2014, at 7:09 p.m., University of Minnesota’s President Eric Kaler contacted our collective via email with an answer to our list of demands. You may read his response HERE, or HERE. 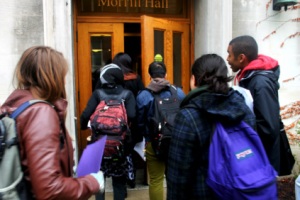 We are extending an invitation to President Kaler to join us for a public forum this Thursday, May 15 at 12:00 p.m. in the Mall Area. We appreciate the list of initiatives taken by the University to increase and maintain diversity, but the testimonies we have collected reveal the need for a more nuanced engagement with our lived realities. Please see our response below.In solidarity always,Whose Diversity?___________________________________________________________________________________________________________May 12th, 2014Dear President Eric Kaler,The Whose Diversity? collective would like to extend our gratitude for the detailed response you provided to our list of demands. We appreciate your stated commitment to addressing questions of diversity and social justice, and we find it refreshing to hear you state that there are few more important problems at the University than the diversity of students, staff, and faculty. We recognize a need for numerical diversity, and we also expect engagement with the lived experiences of people who come from communities that embody said “diversity.” As such, we ask that you and the administration of this University serve and support these communities in action, and not just in word.We appreciate the initiatives being taken by the University to increase and maintain diversity. These initiatives have surely been beneficial to the University community. However, the testimonies we have collected reveal the need for a more substantive and thorough engagement with our lived realities. Institutional racism, ableism, classism, heteropatriarchy, religious intolerance, and xenophobia continue to plague students, staff and faculty via the policies of this University, forcing us to publicly discuss the need for urgent and permanent change beyond what the University is currently doing. The 30-plus demands we presented to you are intended as concrete steps toward a more inclusive and nurturing University community. Thus, we stated that we expected a response from you that included commitment to implementing the demands we presented.Unfortunately, your response did not include a good faith effort to meet any of these requests; instead, this response provided us with a list that delineates current University policies, a list that includes an underlying tone that our demands are unfounded. This showed a lack of willingness to take seriously the concerns of students marginalized by race and/or class status and/or sexual identity and/or spiritual beliefs and/or (im)migrant status and/or (dis)ability.For example, with respect to our demand for affordable housing, you state that:The University strives to minimize the impact of room and board on a student’s overall cost of attendance. The UMTC’s room and board rate for on-campus housing is the 12th-lowest in the Big 10 (out of 13 schools). The University also operates an off-campus housing database in which a student wanting to live off campus can input desired rental rates to search for housing that meets their needs.Yet, the experiences of students reflect otherwise:Can someone -please- tell me why in the world are we tearing down buildings of history just to build extremely expensive apartments? Not just one expensive apartment, but at least -five- extremely expensive apartments are being built on campus within the last two/three years. This is just unreasonable.

Why does a University promote “diversity” when majority of it’s diverse students (people of color, minority, etc.) can’t even afford to live in these apartments? These apartments cater only those who are privileged and wealthy.Our list includes a demand that “the university give marginalized students, staff, and faculty equal opportunity to implement change.” In your response, you state that: 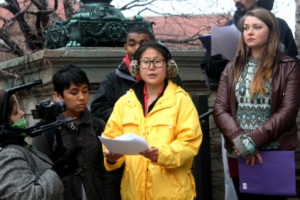 …the University is committed to exploring this critical issue even further during the start of the 2014 school year. To this end, the Provost’s Office will partner with academic units across campus to host a public forum about the value of free speech on campus that will allow us to have an open conversation about how we understand and talk about these issues. We want to ensure that communities on campus have a voice in addressing change, that such change is heard, and that, equally importantly, the University develops thoughtful methods for collaborating with change agents across the institution. It is our hope that Whose Diversity? will be involved in this important public conversation moving forward, and we invite you to be involved in the planning process.This offer comes as ten of us have been singled out, and have standing accusations of violating the University of Minnesota Student Conduct Code as a result of an incident on March 12, 2014. This is despite the fact that our attorney, Bruce Nestor, stated the following in his May 5, 2014 letter to Ms. Sharon Dzik: I believe that the University of Minnesota is making a mistake in seeking to impose discipline on these conscientious, committed students, who seek to force the University to address fundamental questions with respect to the treatment of students of color on campus. Serious and sustained dialogue with these students would be a more productive path than threatening to impose punitive sanctions.
These are only a few examples of the multiple contradictions we recognize in your letter. We share your desire to meet to discuss these issues, and are thankful for the invitation you have recently extended. However, to maintain accountability and to ensure our voices are heard, we are responding to your invitation by inviting you to a community meeting on Thursday May 15th at noon on Northrop Plaza. Please review the Statement of Autonomy we have presented to you for more details about our willingness to engage in discussions via platforms provided by the University. We hope that attending this meeting will allow you to demonstrate your stated commitment to prioritizing the diversity of students, staff and faculty on this campus. Since this is a meeting where we hope to have dialogue, we expect that you will speak on behalf of the University administration. Furthermore, we ask that you recognize the opportunity to make the University of Minnesota a leader in creating a campus environment in which we can all feel safe and be successful. We expect you will do this by publicly stating your commitment to implement some or all of these demands.We look forward to meeting with you this Thursday,Whose Diversity? Collective

Bringing together educators. students, parents, and communities from across the Twin Cities Metro to collaborate, network, and organize social justice in education